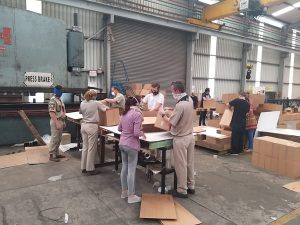 How three organisations and some everyday volunteers came together to make a difference in a country locked down due to the Coronavirus.

The Solidarity Fund was set up in response to the Covid-19 pandemic and is intended to support South African people and NPO’s. They identified the need to provide relief to desperate communities by supplying 25kg food parcels to feed families of four that live in vulnerable communities for 1 month.

Afrika Tikkun (Tikkun a Hebrew word meaning fixing/restoration) is an NPO dedicated to the reduction of youth unemployment and the creation of sustainable futures for youth and their families. They were approached by the Solidarity Fund and tasked in delivering 20 000 food parcels across Gauteng and Cape Town by 25 April.

On Tuesday 21 April I got a call from a friend of mine in the coffee industry, Cuth Bland, who had been asked to help out with the project by Ben Jenkins, another coffee roaster whose wife Kirsten works for Afrika Tikkun. They were heading up this project in Gauteng. Cuth knows about my involvement in SCOUTS SA and asked if I could get involved and bring along some extra hands. Initially there were 8 Scout volunteers.

By Thursday the necessary permits were in place and we were on site at Robor Steel in Kempton Park.  The target was 16 000 parcels for Gauteng. It seemed a very long way off with somewhere around 13 500 to go. They had faced a number of delays with boxes not arriving and food being delivered in drips and drabs. To be fair, in the current lockdown conditions nothing is simple, even for the companies that are essential services. 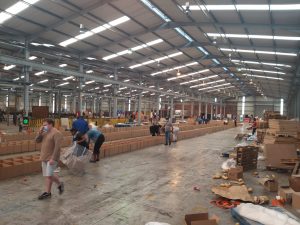 Ben and Kirsten have been great to work with, on the first day they showed us what had to be done and gave us the freedom to get stuck in and figure out the best way to achieve each task as efficiently as possible. Their team, including some staff from Robor who were driving the forklifts around and helping to pack boxes and stack pallets, were such good people and so thankful for our help. It was great to work together with them and they really deserve all the credit for planning and executing what was a wonderful project.

By the end of the day our team managed to get 3 500 boxes out. In many ways this turned the tide in our favour in terms of achieving the 16 000 parcel goal. With permission from Ben I put out a message to the Gauteng Scout Region to try and get more people on site on Saturday. To ensure that we could maintain the social distancing requirements of our current lockdown status we divided the warehouse into two sides with separate teams.

I got in touch with Peter Le Roux, RTC Rovers Gauteng, and posted a message on gtrovers. I also sent a few WhatsApp messages to Rovers around our region. The response we received was phenomenal! I’m never surprised to see Scouts put up their hands, but I’m always impressed by our willingness to serve. I have to give a shout out to our Gauteng Rovers, you’ve really shown that Service is not just a motto, it is a lifestyle. We also got responses from other Scouts around the region, RS’s, DC’s, RTC’s, RTM’s, you name the acronym we had those letters there. To everyone who responded and got involved, you made me so proud to be a member of such an incredible movement!

Service is not just a motto, it is a lifestyle.

We had a slightly smaller Scout team assisting on Friday so we streamlined our processes. We got a bit of a head start by building a stockpile of boxes on Thursday, which helped us to put out another 5 000 parcels on Friday.

This brings us to Saturday, we managed to get a little over 50 of our Scouting fraternity on site to assist with completing this project. All it took was a short message to a small portion of our members to gather more than 50 Rovers, Scouters, Committee members and family members. Thanks to your efforts we managed to ramp up our production and by 14:00 we had built, packed, stacked and prepared to ship our target of nearly 6 000 parcels. In total we managed to distribute 16 380 parcels to people who are in desperate need in Gauteng. Afrika Tikkun also distributed 9 236 parcels in Cape Town. They smashed their target of 20 000 parcels by more than 25% which is absolutely incredible. Over and above that Afrika Tikkun also made sure that there was no waste. They collected all of the cardboard that the food was delivered in so that it could be sold for recycling and those funds could go back into their charitable works. Any food packages that were damaged were also collected for distribution to their feeding schemes so no food went to waste either.

However this was not all. There was one more curveball thrown at us on Saturday. Early in the day Ben asked if we could also help Renee from the Solidarity Fund with a donation to the Midrand SPCA who assist local farmers with food waste. We put together a team of Rovers who were given possibly the toughest, or at least the smelliest job of the day. In amongst the fresh vegetables delivered to the warehouse there were of course a few that were overripe. These needed to be collected and separated from the usable food which was then cleaned and repacked for distribution.

This team did a truly remarkable job, without complaining, and managed to collect enough food that we filled 2 bakkies with butternut and onions which were delivered to a pig farm on the outskirts of Tembisa. They also repackaged a number of full pallets of food and organised the damaged but salvageable packages of non-perishable foods for redistribution to feeding schemes. A special thanks to everyone on this team for your efforts doing a job that most other volunteers did not want to do. Thank you to Aidan Hewson for volunteering his vehicle and driving out there to drop off the food.

Firstly, the methods we use in Scouting WORK! As with all Scouting activities this project was run using the Patrol System. Everyone was divided into Patrols that were given specific tasks and each Patrol had an experienced Patrol Leader. Thank you to our Patrol Leaders who had assisted during the week and therefore were able to lead Patrols on Saturday. Sabrina Miles, Michael Waters, Monique Nel, Frankie Semenya and Holly Esterhuizen. Equally important to our success were the other Rovers who helped during the week, Daniel Kiff, Reinhard Brink and Justice Kgomo. You guys made all the difference and represented Scouting so incredibly well.

Both Ben and Kirsten made a point of sharing how impressed they were to see our Scouts in action, doing their part, doing their best, and demonstrating just how incredible our leadership and teamwork is. We take for granted the baseline of skills that we have within this movement having been trained so well through our Scouting methods.

Secondly, during the course of the week I had a number of great conversations with the other volunteers, who should not be left out in terms of significance. There were hundreds of people from across Gauteng who got involved. Not all at the same time of course but over the duration of the week. This project would not have succeeded without their contributions. Every day our number improved and in no small part thanks to the hands and feet in the warehouse folding boxes and packing and stacking parcels.

Overall I think we have a lot to be proud of, we represented Scouting well and made a positive impact on this project. It was an absolute pleasure to work with Afrika Tikkun and I hope that we have the opportunity again in future. It was equally good to work with all of our Scouts who volunteered during this project. I know that we don’t serve for the applause, but I offer mine none the less. Thank you all for doing such a wonderful job and I know that the families that will benefit from these parcels will be so grateful for your efforts too.

In the end, the Solidarity Fund, Afrika Tikkun and SCOUTS South Africa worked together at a time when we most need to be demonstrating our solidarity, restoring hope, and serving our community. This is not the end, it is the beginning of a long journey where these values will be paramount. Let us continue in Scouting to “Do our best, to be prepared, for service”.